Happy Feast of the Holy Family
Posted by Maureen Teresa Ward at 6:46 PM No comments: 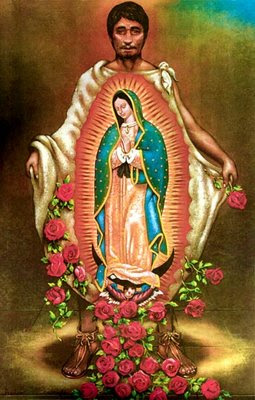 I took this from the Archbishop's Blog

Today's liturgical optional memorial is not found in our missals as it is of recent origin. His canonization by John Paul II took place a few days after the Holy Father concluded Toronto, Canada's World Youth Day, on July 31, 2002 in Mexico City.


Today's feast anticipates the feast of Our Lady of Guadalupe on Saturday, a day of prayer acknowledging the spirituality of the Native Peoples of America.

On December 9, 1531, a native Mexican named Juan Diego rose before dawn to walk fifteen miles to daily Mass in what is now Mexico City. Juan lived a simple life as a weaver, farmer, and laborer. That morning, as Juan passed Tepeyac Hill, he heard music and saw a glowing cloud encircled by a rainbow.

A woman's voice called him to the top of the hill. There he saw a beautiful young woman dressed like an Aztec princess. She said she was the Virgin Mary and asked Juan to tell the bishop to build a church on that site. She said, "I vividly desire that a church be built on this site, so that in it I can be present and give my love, compassion, help, and defense, for I am your most devoted mother . . . to hear your laments and to remedy all your miseries, pains, and sufferings."

The bishop was kind but skeptical. He asked Juan to bring proof of the Lady's identity. Before Juan could go back to the Lady, he found out his uncle was dying. Hurrying to get a priest, Juan missed his meeting with the Lady. The Lady, however, met him on his path and told him that his uncle had been cured.

She then told Juan to climb to the top of the hill where they first met. Juan was shocked to find flowers growing in the frozen soil. He gathered them in his cloak and took them at once to the bishop.

Juan told the bishop what had happened and opened his cloak. The flowers that fell to the ground were Castilian roses (which were not grown in Mexico). But the bishop's eyes were on the glowing image of the Lady imprinted inside Juan's cloak.

Soon after, a church was built on the site where our Lady appeared, and thousands converted to Christianity. Our Lady of Guadalupe was declared the patroness of the Americas.

Juan Diego deeply loved the Holy Eucharist, and by special permission of the Bishop he received Holy Communion three times a week, a highly unusual occurrence in those times.

Pope John Paul II praised Juan Diego for his simple faith nourished by catechesis and pictured him (who said to the Blessed Virgin Mary: “I am a nobody, I am a small rope, a tiny ladder, the tail end, a leaf”) as a model of humility for all of us.


I thank you, Father ... that you have hidden these things from the wise and understanding and revealed them to babes; yea, Father, for such was your gracious will" (Mt 11:25-26).

Dear Brothers and Sisters,
These words of Jesus in today's Gospel are a special invitation to us to praise and thank God for the gift of the first indigenous Saint of the American Continent.

With deep joy I have come on pilgrimage to this Basilica of Our Lady of Guadalupe, the Marian heart of Mexico and of America, to proclaim the holiness of Juan Diego Cuauhtlatoatzin, the simple, humble Indian who contemplated the sweet and serene face of Our Lady of Tepeyac, so dear to the people of Mexico....
Today I address a very affectionate greeting to the many indigenous people who have come from the different regions of the country, representing the various ethnic groups and cultures which make up the rich, multifaceted Mexican reality. The Pope expresses his closeness to them, his deep respect and admiration, and receives them fraternally in the Lord's name.

What was Juan Diego like? Why did God look upon him? The Book of Sirach, as we have heard, teaches us that God alone "is mighty; he is glorified by the humble" (cf. Sir 3:20). Saint Paul's words, also proclaimed at this celebration, shed light on the divine way of bringing about salvation: "God chose what is low and despised in the world ... so that no human being might boast in the presence of God" (1 Cor 1:28,29).
It is moving to read the accounts of Guadalupe, sensitively written and steeped in tenderness. In them the Virgin Mary, the handmaid "who glorified the Lord" (Lk 1:46), reveals herself to Juan Diego as the Mother of the true God. As a sign, she gives him precious roses, and as he shows them to the Bishop, he discovers the blessed image of Our Lady imprinted on his tilma.

"The Guadalupe Event," as the Mexican Episcopate has pointed out, "meant the beginning of evangelization with a vitality that surpassed all expectations. Christ's message, through his Mother, took up the central elements of the indigenous culture, purified them and gave them the definitive sense of salvation" (14 May 2002, No. 8).

Consequently Guadalupe and Juan Diego have a deep ecclesial and missionary meaning and are a model of perfectly inculturated evangelization.

"The Lord looks down from heaven, he sees all the sons of men" (Ps 33:13), we recited with the Psalmist, once again confessing our faith in God, who makes no distinctions of race or culture.

In accepting the Christian message without forgoing his indigenous identity, Juan Diego discovered the profound truth of the new humanity, in which all are called to be children of God. Thus he facilitated the fruitful meeting of two worlds and became the catalyst for the new Mexican identity, closely united to Our Lady of Guadalupe, whose mestizo face expresses her spiritual motherhood which embraces all Mexicans.
This is why the witness of his life must continue to be the inspiration for the building up of the Mexican nation, encouraging brotherhood among all its children and ever helping to reconcile Mexico with its origins, values, and traditions.

The noble task of building a better Mexico, with greater justice and solidarity, demands the cooperation of all. In particular, it is necessary today to support the indigenous peoples in their legitimate aspirations, respecting and defending the authentic values of each ethnic group. Mexico needs its indigenous peoples and these peoples need Mexico!

Beloved bothers and sisters of every ethnic background of Mexico and America, today, in praising the Indian Juan Diego, I want to express to all of you the closeness of the Church and the Pope, embracing you with love and encouraging you to overcome with hope the difficult times you are going through.
At this decisive moment in Mexico's history, having already crossed the threshold of the new millennium, I entrust to the powerful intercession of Saint Juan Diego the joys and hopes, the fears and anxieties of the beloved Mexican people, whom I carry in my heart.

Blessed Juan Diego, a good, Christian Indian, whom simple people have always considered a saint! We ask you to accompany the Church on her pilgrimage in Mexico, so that she may be more evangelizing and more missionary each day. Encourage the Bishops, support the priests, inspire new and holy vocations, help all those who give their lives to the cause of Christ and the spread of his Kingdom.

Happy Juan Diego, true and faithful man! We entrust to you our lay brothers and sisters so that, feeling the call to holiness, they may imbue every area of social life with the spirit of the Gospel. Bless families, strengthen spouses in their marriage, sustain the efforts of parents to give their children a Christian upbringing. Look with favor upon the pain of those who are suffering in body or in spirit, on those afflicted by poverty, loneliness, marginalization, or ignorance. May all people, civic leaders and ordinary citizens, always act in accordance with the demands of justice and with respect for the dignity of each person, so that in this way peace may be reinforced.

Beloved Juan Diego, "the talking eagle"! Show us the way that leads to the "Dark Virgin" of Tepeyac, that she may receive us in the depths of her heart, for she is the loving, compassionate Mother who guides us to the true God. Amen
Posted by Maureen Teresa Ward at 9:40 AM No comments:

75th Anniversary of the Legion of Mary in Ontario 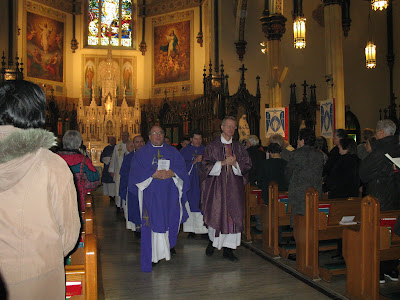 We began with the rosary at approx 10:40 am today followed by mass celebrated by His Grace, Archbishop Terrence Prendergast at Saint Patrick Basilica here in Ottawa. There were about 200 in attendance and that included about thirty Legionaries who took a bus from Kingston. Celebrating with the Bishop were at least eight priests and Deacon Scheer who is the Spiritual Director of Our lady of Victory Praesidium . Among the priests were Monsignor Richard Siok Pastor of Saint Patrick Basilica, Father Anthony Hannon, Spiritual Director of the Legion of Mary in Ontario, Monsignor Latour from Annunciation of the Lord Parish who is the Spiritual Director of Morning Star Praesidium, Father Boyd from the Good Shepherd Parish, and Father McEvoy who has led many Legion of Mary Retreats over the years. 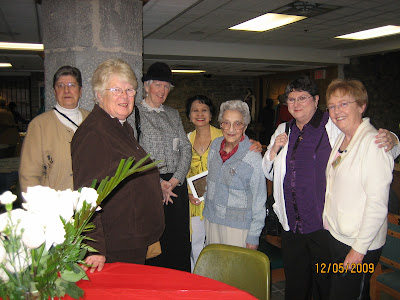 After mass we met in the SCAVI for a wonderful reception .  Father Anthony Hannon led the Angelus after which we had a delicious sit down lunch. The afternoon included interesting displays of the Legion of Mary over the years: numerous photographs and stories etc. and because Our Lady of Victory Praesidium was celebrating their 70th Anniversary of their Praesidium they had their own beautiful display of events past and present. Sister Marilyn welcomed us all and thanked the Bishop and made special mention of our heroic elderly Legionaries. 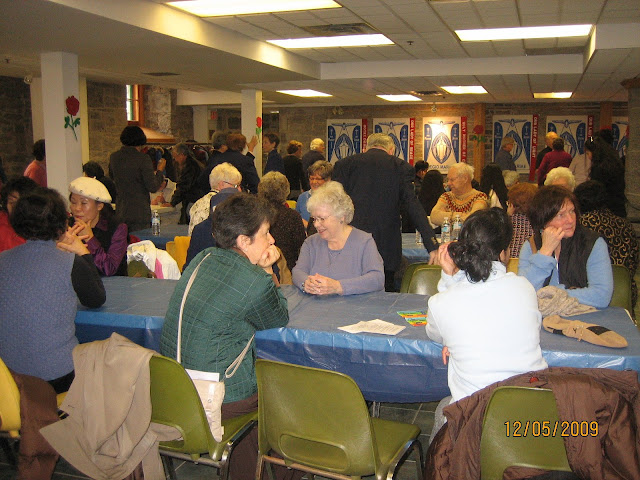 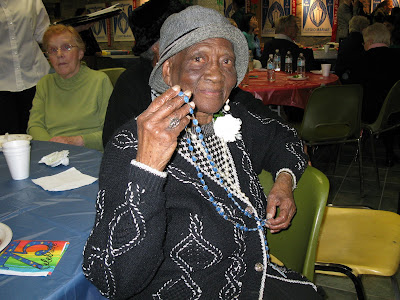 Marilyn mentioned that one of our Legion Pillars, Dorothy Harris of Morning Star Praesidium, Annunciation of the Lord Parish, was in the Legion since 1933. In fact When Dorothy joined the Legion in London England it was Frank Duff who opened her Praesidium which coincidentally was also called Morning Star. After lunch, members of Our Lady of Guadalupe Praesidium of the Good Shepherd Parish sang the song "Our lady of Guadalupe" This Praesidium  is indeed the "new kid on the block". 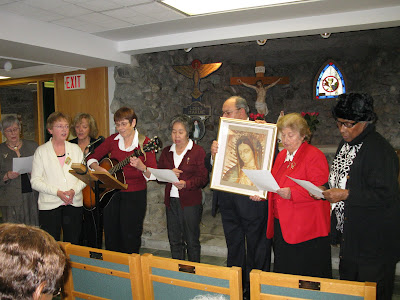 It was established by Jennifer Snell formerly of Morning Star and members held their first meeting October 2 of this year.  It was a wonderful afternoon and when the Kingston visitors were getting ready to make their way back home, Marilyn gave them copies of the Legion songs to sing on the bus. But before the bus left Marilyn grabbed her guitar, boarded the bus and gave them a great send off  by leading  "All Is In the Hands of Mary" as everyone happily joined in. Thank you to all who made this such a joyous day and thank you Mary!!! 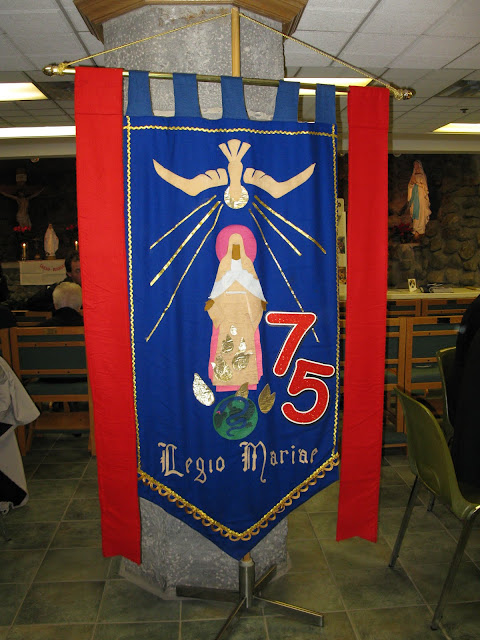 Posted by Maureen Teresa Ward at 4:53 PM No comments: